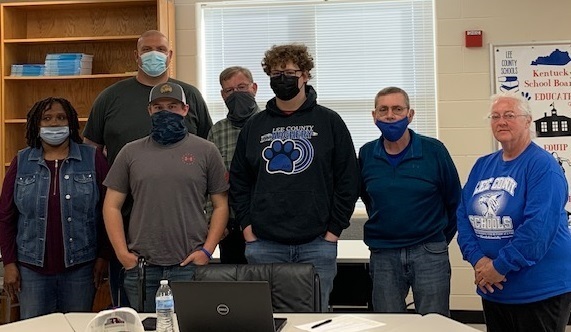 Members of the Lee County Board of Education and Superintendent Sarah Wasson recognized the LCMHS Varsity Archery Team and team members Kory Napier and Baylee Fox during the regular meeting on Tuesday, April 13.

Baylee Fox finished 6th, shooting a 286/300, at the KHSAA regional competition in Whitesburg.  The finish allows him to compete in the KHSAA state tournament later in April.  Kory Napier finished 3rd at the Annual Vietnam Veterans Tournament in Berea, where he shot 282/300.  Kory had multiple top-five finishes during the season.

Congratulations to the team, to Kory and Baylee, and to Coach Jeff Perdue on a successful season!

(Pictured are Kory and Baylee with members of the Lee County Board of Education.)